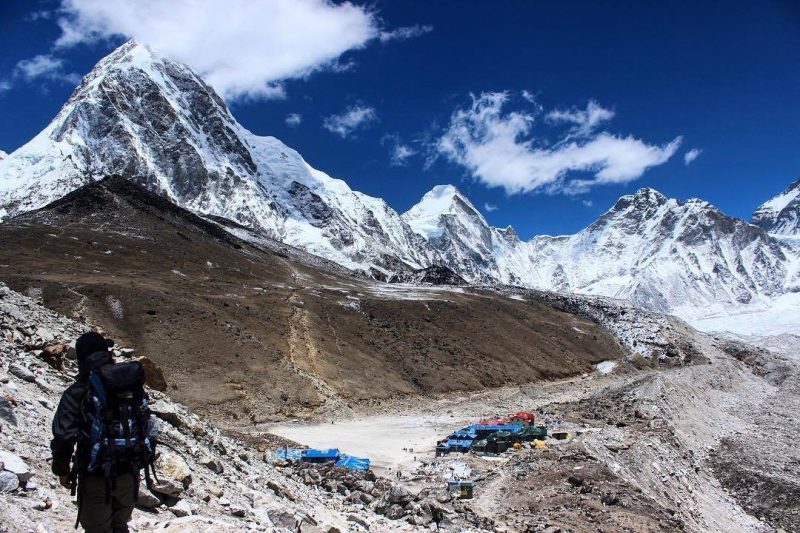 10 Best Walking and Hiking Tours in Nepal is the best way to enjoy your time in nature. And, it’s certainly the best way in a country like Nepal, where there are no means of transportation in mountainous regions. Nepal is a sacred land where 8 of the 10 highest mountains of the world reside. Likewise, here you can find 14 peaks with more than 8000 meters in height. These snow-capped peaks have successfully seduced thousands of adventurers from all over the globe.

For those wanting to go for a hiking tour in Nepal, Happyland Treks has brought you a list, “10 Best Walking and Hiking Tours in Nepal,” that will describe some of the best treks in Nepal.

The Everest Base Camp Trek is one of the most popular treks in Nepal and throughout the world. It is also the top one in the “10 Best Walking and Hiking Tours in Nepal” list. The trek begins from a flight from Kathmandu to Lukla. The flight to Lukla is one of the popular activities of the trek as you get some stunning views of the Himalayas from the sky. The trek then moves to Namche Bazaar, a gateway to Everest. Then, you will be moving to Tengboche, Dingboche, and finally Everest Base Camp.

The highest elevation you will be reached in this trek is 5,550 meters, i.e., Kalapatthar, the best vantage point of the trek. Generally, Everest Base Camp Trek can be completed in around 15 days. It is an easy trek, so people of all experiences can challenge the EBC trek.

Annapurna Base Camp Trek is another most popular trek in the 10 Best Walking and Hiking Tours in Nepal. This trek begins from Pokhara and then moves to Ghorepani, Poonhill, Ghandruk, and eventually to the Annapurna Base Camp 4130m. The trek takes you way around one of the remote traditional villages where you will get to see beautiful forests and mountains and learn about Nepal’s ancient cultures.

The journey is indifferently full of exciting bums of ups and downs on the rough trail. This trek offers stunning views of Annapurna South, Annapurna I (8,097m/26,566ft), Tent peak, Fishtail, and many others.

Gokyo Lake Trek is also a trek that takes place in the Everest Region. Gokyo Lakes are some of the most beautiful lakes in the world. Gokyo Lakes are oligotrophic lakes in Nepal’s Sagarmatha National Park, located at an altitude of 4,700–5,000 m (15,400–16,400 ft) above sea level.

Most people also argue that it is much better than the classic Everest Base Camp Trek. This trek lasts for 13 days and has moderate difficulty. The trek follows the same trail up to Namche Bazaar and a bit after that. However, this trek takes you to a group of lakes, Gokyo Lakes, rather than heading to the lap of the world’s summit.

The Annapurna Circuit Trek is not the same as the classic ABC trek. It is much more beautiful than the classic one. This trek is also longer than the ABC trek and can last up to 19 days. It is even the longest trek in the 10 Best Walking and Hiking Tours in Nepal list. The highest point of this trek is 5416 meters which is at Thorong La Pass. (Thorang top)

The best time to go for the Annapurna Circuit trek, between end of February to May and end of September to first week of December. The trek begins from Besisahar and then moves to Bahundandah, Jagat Lamjung, Dharapani, Manang, Muktinath, and eventually to Jomsom before returning to Pokhara. Although this trek has easy difficulty, you need to train at least a month before as the trek can get pretty exhausting with a long day of the walk. So, make sure to do acrobatic exercises like swimming, running, and cyclic a month before the trek.

Langtang Village Trek is one of the favorite treks of trekkers. This trek offers expansive views, a look at the interesting Tamang culture, and a laid-up experience of the rural region. It is also one of the nearest treks from Kathmandu Valley. So, it is mostly preferred by those with a short time frame for trekking.

The trek’s major highlights are the panoramic views across vast open valleys at the end of the trek, Incredible Mountain views of the Langtang Himalayas, valley, and Tibet from Kyanjin Ri, and the dense forest accompanied by high alone meadows and yak pastures. Langtang Trek takes around 10 days to complete and reaches the highest altitude of 3800 meters. The trek begins from Syabru Besi with a destination to Kyangjin.

Everest View Trek is another best trek in the 10 Best Walking and Hiking Tours in Nepal list. It is a great choice for those with short time and who can’t complete a classic Everest Base Camp Trek. Within just a week, you can get a close-up view of the majestic Everest happyland.

The trip begins with a half an hour flight to Lukla. Then, for the next two days, you will be hiking to Namche Bazaar. Most of the trails in this trek are the same as the classic EBC trek. After Namche, you will be heading towards the Everest View Hotel, from where you will get an astonishingly beautiful panorama of Mt. Everest, Ama Dablam and many other mountain peaks.

Poon Hill Trek is one of the shorter treks in the 10 Best Walking and Hiking Tours in Nepal. This trek can be completed from a week to 10 days. This trek moves on almost the same trail as the classic Annapurna Base Camp trek. The major highlight of this trek is the gorgeous view of sunrise from Poon Hill. This trek is also popular as Annapurna Sunrise View Trek. Moreover, it is an easy trek, so even trekkers with no prior experience can attempt it.

The maximum elevation of this trek is 3210 meters which is the Poon Hill itself. Likewise, Poonhill, due to the lower elevation of the trek, you don’t have to worry about altitude sickness. From Poonhill, you can get gorgeous views of the Annapurna Ranges, Dhaulagiri, and many more.

Mardi Himal Trek is another short and renowned trek in Nepal. Even though the trek is short, it’s in no way easy. It is an intensive Himalayan adventure that takes you to the Mardi Himal Base Camp. This trek takes place in the Annapurna region. However, it is not as popular as the Annapurna Base Camp Trek.

The trek begins from Pokhara like the classic ABC trek. You will spend 5 hours every day trekking and gaining altitude in the Annapurna region. The highest point of this trek is the Mardi Himal Trek at an altitude of 4500 meters. It’s a 5days’ to 11 days trek with moderate difficulty.

Gosaikunda Trek falls in the Langtang Region and is one of the shorter treks in Nepal. The trek can be completed in 9 days and has medium difficulty. Trekkers with all experience levels can attempt the trek as there are no experience restrictions for this trek. Gosainkund lake has a holy significance in Nepal, so it is very popular among pilgrims. Hindus from all over the world visit Gosainkunda, particularly during Janai Purnima, to worship the lake.

This trek offers beautiful views of Langtang Himal, any many high mountain in the far distance. The trek begins with a drive from Kathmandu to Dunche. From Dunche, you will be trekking to thulo syabru then sing gompa to directly Gosainkunda. The highest point of this trek is Gosainkunda Lake, which is 4360 meters above sea level.